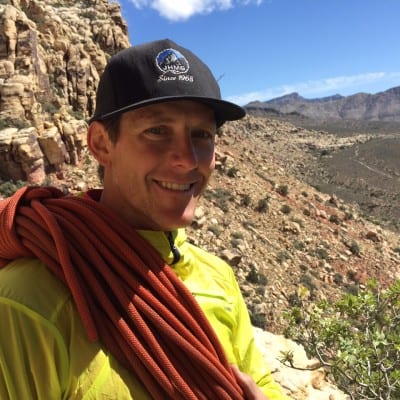 Nate has been guiding for JHMG since 2004. He is based out of Boulder, CO, guiding in numerous locales over the course of the year: mainly the Tetons, Boulder, Aspen, Alaska, and Vegas. An AMGA Rock Guide, Nate has guided full-time in Red Rocks and the Tetons, and has worked in many other western US rock and alpine venues in addition to Denali and Aconcagua. In the winter he works as a Diamond Ski Pro and resort trainer at Aspen Highlands. He has a B.S. in Kinesiology along with a C.S.C.S. credential. Combining this academic background with a senior guide’s knowledge gives him a unique perspective on athletic performance in the mountains. Testing his training programs, he’s climbed 5.13, won a 100 mile ultramarathon, and had countless alpine, rock, and ski adventures. He finds the greatest reward in empowering his guests through knowledge and positive experiences. His goal with his guests is to transform an intimidating mountain challenge and turn it into a refined, streamlined adventure. Most of his best days in the outdoors are spent with his young son Blake, heading out fishing, skiing, and climbing.