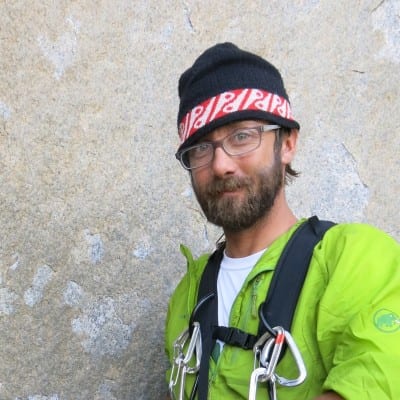 Doug Workman began climbing in Converse All-Stars on Connecticut’s Traprock in 1988. Since then he has climbed and skied all over the World including expeditions to Pakistan, China, Alaska, and Antarctica as well as climbing trips throughout Europe and North America—including a day trip up El Capitan’s “Triple Direct” and multiple trips up the “Nose” and “Astroman” in Yosemite. He began guiding for Jackson Hole Mountain Guides in 2001. As a guide for JHMG, Doug has guided hundreds of guests up the Grand Teton and over a dozen brave souls down it on skis.
Doug also currently works for Valdez Heli-Ski Guides, High Mountain Heli Skiing, Ice Axe Expeditions and Jackson Hole Alpine Guides. He has guided skiers off the summit of Denali, guided 5 ski mountaineering trips to the Antarctic Peninsula, and led sail/ski trips to Iceland, Svalbard, and the Lyngen Alps of Norway. Past experience also includes rigging and safety work for National Geographic Television, Camp Four Collective, Chris Davenport Productions, Warren Miller Entertainment, and Teton Gravity Research.
Doug is the Snow and Avalanche Technical Representative for Mammut North America.