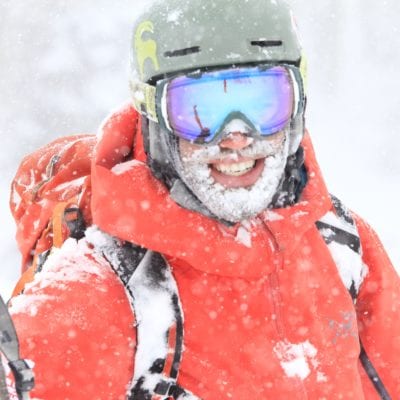 Chris Brown grew up in Pennsylvania and was introduced to skiing by his father when he was two. He has been hopelessly addicted ever since. He moved west in 2004 to attend University of Utah in the hopes of skiing bigger mountains and deep snow. This is where backcountry skiing became part of his life.
Chris graduated in 2009 with a B.S. in Urban Design and moved to Washington state where he spent a few years skiing the Cascade and British Columbia backcountry and Volcanoes. This is where his passion of the outdoors led him to pursue a career in guiding. He moved back to Utah in 2012 to continue forward with his guiding and AMGA coursework in pursuit of full IFMGA certification.
He enjoys skiing in Utah, Teton, Cascade and British Columbia backcountry, and is planning to travel to new places to push his ski mountaineering. In the winter Chris is skiing, guiding, and teaching avalanche classes. In the summers he rock climbs, alpine climbs, mountain bikes, and works as a guide for these activities.