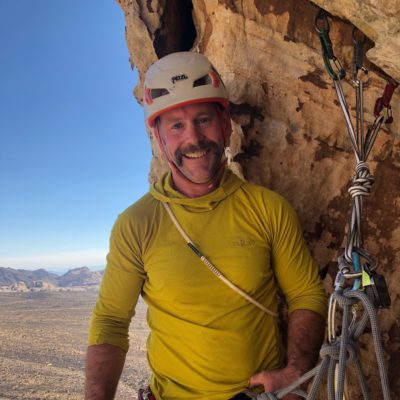 Sean is originally from Seattle, WA, but didn’t dip his toes into climbing until moving to California and learning to place his first cam in Joshua Tree National Park in 2006. Sean moved to Las Vegas for grad school in 2010 and the sandstone of Red Rocks and the limestone of Mt. Charleston has kept him there. Sean has been guiding for JHMG in Red Rock since 2019. Sean climbs year round in Red Rock and loves early morning climbs during the summer when he has the park to himself. Outside of Red Rock Sean enjoys alpine climbing in the Eastern Sierra and the Cascades of the PNW. Sean is just as happy with a pair of ski boots on as a pair of climbing shoes and he loves days when he can do both in the same day. Sean has an endless amount of stoke and is pumped to get folks on their first climb outside or lead them up a climb they didn’t think they could do.