Towering high above the Jackson Hole Valley, a mighty mountain range rises seemingly out of nowhere. As one of the most prominent mountain ranges in the country, the Tetons can’t be missed. But who first scoured these towering pinnacles of granite?

The answer isn’t as straightforward as it would seem. The mighty Grand Teton, standing 13,775- feet above the sea has a rather vague (and hotly debated) history. Arguments from the original naming of the range from the first person to summit are still a topic of discussion today. One thing is for certain – with 6,530 feet of prominence, climbing this mighty icon was – and still is – no small feat.

Unique Histories of the Grand Teton

The history of the Grand Teton is surprisingly shrouded in mystery. Certainly one can argue that summit attempts likely pre-date Euro-American explorers since you can find ancient Native American structures excitingly close to the summit.

Even the name “Teton Range” is under debate. Regardless of who got there first, no one can deny the allure and beauty of the Grand Teton.

With such a unique and debatable history, it’s no wonder that this mountain still evokes a sense of awe and wonder today.

Long before Euro-American settlers began expeditions in the American West, the Tetons and surrounding areas had a rich Native American history.

The Shoshone, Blackfeet, Gros Ventre, and Crow tribes all inhabited the Jackson Valley and the Teton Range. Each of these tribes held separate beliefs about the staggering mountains surrounding the Jackson Hole Valley. Since not many written records exist about how these tribes interacted with the mountains, we can only imagine the complex relationships between the land and the first people.

One of the most unique aspects of the Grand Teton is the famous Enclosure structure. This unique structure pre-dates any recorded expedition of the Grand Teton. It sits on the second-highest point on the peak, and its use is still a mystery. Some believe it is a place of ritual, but others believe it could have been something else – such as a shelter for Native American climbers.

How the Teton’s Got their Name

No one is really certain how the Teton Range got its name. Some people argue that the Sioux Tribe, native to the area, named the mountains prior to the 1700s. “Tetonwan” means “dwellers of the prairie” in Sioux. Euro-American explorers simply could have adapted the name while speaking with local inhabits along their journey. In the mid-1800s, the French-Canadian expedition lead by Donald McKenzie came across the Teton Range. Many people believe this Euro-American and Iriquois expedition named the mighty mountain range. If you are in this camp then you would say that the Grand Teton derives its name from French, meaning “large teat.” When you look at the mountain, it’s easy to see how this name got adapted. Early maps even label the Grand Teton in the late 1800s, before any Euro-American had summited the mountain.

Regardless of which history you believe, it’s clear that people from all walks of life admired the Grand Teton for centuries.

Who First Climbed the Grand Teton?

Again, you’ll find plenty of debate in the first summit of the Grand Teton. One thing that makes this mighty mountain so unique is the Enclosure. This man-made horseshoe-shaped structure certainly suggests that the first written record of a summit attempt might not have actually been a “first.” It’s certainly possible that the first people to stand on the summit of the Grand Teton came from one of the many tribes that inhabited the area.

There are even more rumors when it comes to the first summit of the Grand Teton. Legend has it that a fur trader by the name of Captian Benjamin L.E. Bonneville was the first person to summit the Grand Teton in 1832. He was apparently looking for a shortcut from the Wind River Valley to the Upper Green River. However, no official proof for his summit stand exists.

A few other rumors are floating around about who stood atop the tiny summit first, but the first real expedition took place in 1872. A man named Ferdinand Hayden led an epic expedition into the Teton Range with the goal of mapping these majestic peaks. In July, two members of his team, James Stevenson and Nathaniel Langford claimed to record the first official ascent of the peak. However, despite having noted and mapped the saddle and Enclosure, no proof exists of their summit stand.

But a few years later, in 1898 William Owen, Franklin Spalding, Frank Petersen, and John Shive recorded the first official ascent with solid proof. The famous Owen-Spalding route (rated 5.4) is still the primary route to the summit of the Grand today.

Ecstatic, they reported their feat to an outdoor magazine and a huge debate erupted. The Langford/Stevenson team claimed it had already been done, while the 1898 expedition team claimed they saw no prior proof on the summit.

The feud continues even to this day. After the Owen/Spalding team installed a plaque commemorating their climb, the sign mysteriously disappeared from the summit in 1977.

Although the real first person to stand on the summit of this iconic peak may forever be lost to history, it doesn’t stop people from climbing the Grand Teton today. In fact, this iconic mountain is one of the 50 Classic Climbs in America and at the top of any aspiring alpinist’s bucket list. With countless different routes up the Grand Teton, this mountain is sure to see plenty of climbers for years to come. 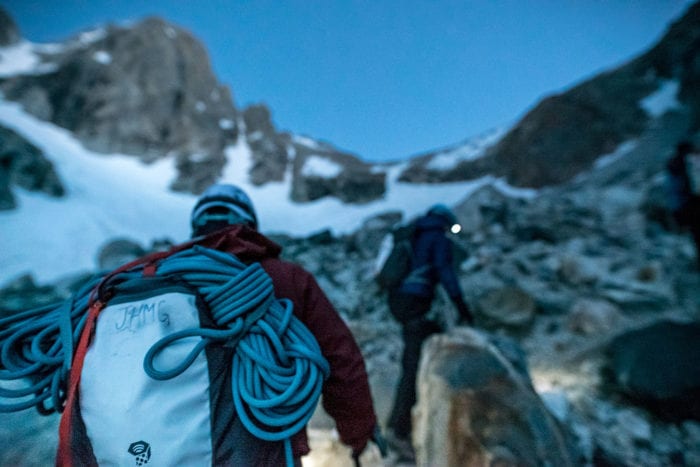 How the Grand Teton Climbing Routes Got Their Names →